The proud history of Basildene Manor has its beginnings at the turn of the century.

Percy Willmott and brother Frank arrived from England as teenagers and took to farming in the south west. Percy subsequently took up the position of Chief Lighthouse keeper at Cape Leeuwin Lighthouse at Augusta before moving to the land in Wallcliffe Road to set up their family farm.

Basildene was built in 1912, by Percy and his wife Margaret (Brockman) for his family. Two sons (Henry and Edward), and a daughter (Madge) were raised at Basildene and their descendants remained at Basildene until the late 1970’s.

Inspired by the beautiful and unique natural materials abounding in Margaret River, he painstakingly built a residence that would stand as a beacon of grandeur against the surrounding Karri trees. The Manor is shaded at the front by a huge oak tree that was planted in approximately 1910 from an acorn acquired from the grounds of Buckingham Palace.

Granite rocks were quarried on the property and the finest selected to build the magnificent walls, while inside superbly finished local jarrah was used to fashion the staircases, balustrades, the floors and the majestic central gallery and main hall.

Today, Basildene still stands proud and guests from all over the world are drawn to its charms and a sense of history from a bygone era.

In 1998 Basildene Manor was classified by The National Trust of Australia as a significant heritage property. 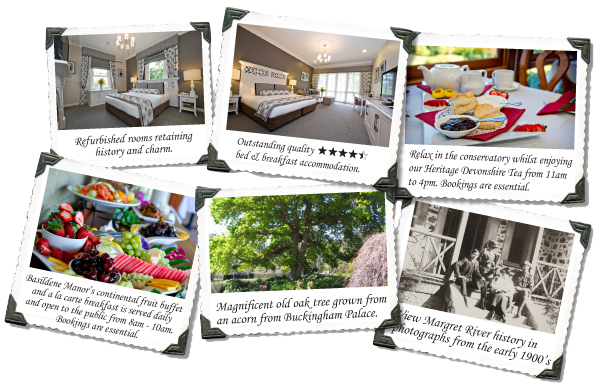